Thomas Whieldon was baptized Sep. 9th. 1719 in the church in Stoke-on-Trent, Staffordshire, England as the son of Joseph Whieldon and wife Alcia (Alice).

The trade of his father is unknown, but it is most likely that Joseph Whieldon was a potter of mayby had work connected with the potting industry. Joseph died in 1731, when Thomas was 11 years old. His mother had already died in 1726.

It is unknown to whom Thomas as apprenticed, but it is possible that he was raised by a family member who was a potter and therefore apprenticed to him.

The master potter - only 21 years old

In 1740, only 21 years old, he is mentioned as a master potter in Fenton Low. He was the partner of John Astbury, a leading potter of this time.

In 1747 he leased new premises at Fenton Vivian, bought this property in 1748 and the following year acquired Fenton Hall. By this time he is known to

He worked though out his entire active period, which lasted until 1780, with both different clays and glazes. He is known for his agate ware, his tortoise-shell glazes and colourfull figures. He made almost every possible item in pottery, both handles for knives and forks, tea pots, punch pots, cups, plates, saucers, cream cows, figures i.e. birds, horsemen, cats etc.

The shapes of the table ware were both imitations of those used by silversmiths, but also with inspiration from nature, collieflower tea pots as one of the best known items.

He mostly used colours, and didn't prefere the white clay, transparantly glazed. The agate has it's wonderful agate-like lairs of colour from the clay. Two colours of clay are mended, thus creating the lairs of colours. Almoste the same effect can be obtained by using colours of glaze. Green, brown, yellow in different variants are added and during buring run into each other, creating the distinct tortoise-shell patterns.

In 1744 on 19. of April Thomas was married at Barlaston Church, Staffordshire to

At the age of 27 Ths. Whieldon was now a widower with a little girl.

Thomas Whieldon had many apprentices, amoung which Josiah Wedgwood and Joisah Spode were to become the two most famous - and ritchest.

Josiah Spode's father was buried in a pauper's grave in Stoke, but Thomas Whieldon took him as his apprentice.

Josiah Wedgwood's father died early, but left his son Ł20 and a share of the family's pottery. Being under age, Whieldon first took him as his apprentice, and after this they were partners from 1751 to 1756. During this time the bright, white earthenware was invented, which was to become of the greatest achevements and successes of Josiah Wedgwood. Probably this is why they split up, as Whieldon never produced such transparent glazed earthen ware. Later on his descendants said, that the two master potters were enemies, but no evidence can be found - so far - to support this thesis. I suppose that when Wedgwood came of age and could work on his own, the decided to split up - in such a way that Wedgwood could work with his cream ware, and Whieldon with his tortoise-shell-ware. In 1756 Wedgwood sent a dinner service in his new cream ware to the queen, who was so delighted with this that she allowed him to called it Queen's Ware. It is still produced in two different shapes.

When Wedgwood startet his own business, he let a piece of land in Fenton from Whieldon - at a price of Ł10 pr. annum.

William Greatbach, born 1735, was by birth related to Whieldon. Breatbach was also one of his apprentices. Later he moddled several items for Wedgwood, but Greatbach at the same time run his own factury.

You would need five things in order to manufacture pottery in the 18th. century:

Ideas for models for items,

* good craftsmen and other workers,

* some where to have your factury or workshop,

* firewood or coal to heat the owns,

* and transportation for the finished products from the factury to the place of the potential buyers.

Therefor the potters were also both into getting coals, and the amount needed couldn't be sufficiently saticefied by the local area in Staffordshire. The Parrot family had been operating mines in Warrickshire from atleast 1721. This was at Hawkesbury Hall. In 1774 Messrs. Parrot, Fernyhough and Whieldon had eight pits in Bedworth and also the Hawkesbury Hall colliery.

Maybe Whieldon bought his coal from Hawkesbury Hall and thus got aquainted with the Parrot family.

What is certain, is that his second wife was Alice Parrott, to whom he was married on

as daughter of Franciscus Parrott (Francis Parrott) and his wife Alice Dickinson. They were married 25.10.1714 at Horton, Staffordshire.

They had two daughters, Delicia in 1715, and Alice in 1717, before the family moved to Bedworth / Hawkesbury in Warwickshire.

She died at church in Stoke on 21.10.1772. Josiah Wedgwood wrote in his diary that they had lost nok only a good neighbour but also a good friend.

At this time Thomas Whieldon may have lived at Stoke Hall, but also owned Fenton Hall, where his pottery was situated. 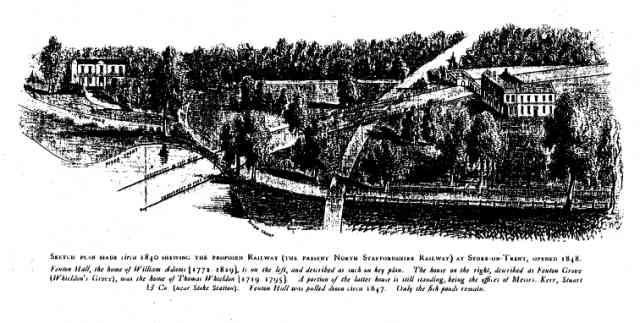 In 1775 Thomas Whieldon was one to the exucters of his brother Mr. William Whieldon's will. William had lived in Stoke on Trent, married and had eight children.

Thomas Whieldon was after the death of his second wife once again a widower. But once again he wasn't in a hurry to find a new wife. It wasn't until 1776 that he for the third time stood before the alter.

He chose a spinster from London,

Upon their marriage a settlement was made, which ensured Sarah Turner the yearly sum of Ł 200 after her husbands death.

Sarah was a daughter of John Turner Esq. of no. 1 Great Cumberland Street (now Great Cumberland Place), St. George Hanover Square, London. The house no longer excists, but it was newly built when John Turner leased it in 1773. He died here 01.12.1779, and the execution of his will lasted until 1784. In 1778 a inventory was made of his estate, and in the adverticements in the London Gazetter we can sse, that he had both a harpsicord, a piano forte, a telescope and a small but fine collection of books, and a fine collection of paintings, in which Raphael was represented.

Also he owned stables in both Cumberland Mew and Bryanstone or Bryanston Mew, which his daughter Lucy inherited and owned to her death in 1829.

But I haven't been able to find out who his wife was nor what profession he work in before his retirement. He had five daughters:

* Charlotte Turner, died after 1830, married to

George Goodwin, Lived at first in Macclesfield, Cheshire, but abt. 1830 in Derby, Derbyshire. - Two children.

Now Thomas Whieldon found the happiness in family life that he had wanted so much. Sarah gave birth to six children, whwn Thomas at the ages from 57 to 68:

Daniel Bird Baddeley of Ivy House. They had eight children.

* Charles Whieldon, born 11.02.1785. He seems to have moved to Leake, Lincolnshire, and had three children.

* George Whieldon Esq. of Springfield House and Mytchett House, Co. Warwickshire. He married twice. First, in 1809, a granddaughter of Josiah Spode I,

In 1780 Thomas Whieldon retired from the pottery business, demolished much of the factory at Fenton Hall, rebuild the house and called it Whieldon's Grove - or Whieldon Hall. He layed the grounds out for a park for his family and enjoyed life here.

In 1786 he was appointed sheriff of Staffordshire for the year 1787.

He is said to have accumulated an estimated fortune of Ł 10.000, which was a remarkable sum in those days.

He and his wives and two duaghters were all buried at Stoke in Trent church yard, but the grave and the monument are long gone.